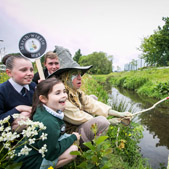 East Belfast Gets Ready To Connect With Marsh-Wiggle Way


A brand new section of the Connswater Community Greenway opened to the public recently. Marsh-Wiggle Way, a new one kilometre cycle and pedestrian link connecting Orangefield Park and Clarawood to the Braniel, marks the completion of a major section of the Connswater Community Greenway in east Belfast. Following a recent public campaign, which received overwhelming support, Marsh-wiggle Way was named after the fictional frog like humanoid marsh-dwellers found in The Chronicles of Narnia: The Silver Chair, written by east Belfast Author C.S Lewis.

When completed in 2017, the Connswater Community Greenway will be a living landmark and a fantastic legacy for everyone from across the city and beyond to enjoy. As well as offering greener, cleaner spaces, including a wildlife corridor from Belfast Lough to the Castlereagh Hills, the nine kilometre linear park includes 16km of foot and cycle paths, improved green spaces, 26 new or improved bridges and crossings, 5km of flood walls and embankments, 6 new tourism and heritage trails and a C.S. Lewis Square at Holywood Arches for celebrations and events.

As part of the opening celebrations of Marsh-wiggle Way key stakeholders including politicians, residents, businesses and nearby schools were invited to walk the way and enjoy activities such as music, crafts, story-telling and even take part in a unique Marsh-wiggle Wig Wam experience.  The newly landscaped greenway link with lighting and street furniture will be open 24/7 and encourage people to get active by walking, running or cycling.

The Connswater Community Greenway is a £40 million funded project developed by EastSide Partnership and delivered by Belfast City Council who is managing the project construction. Funded by the Big Lottery Fund, Belfast City Council, the Department for Communities and the DfI Rivers Agency, the Greenway will improve the quality of life for local people and create a legacy for future generations.

For further information on Marsh-Wiggle Way and the Connswater Community Greenway visit www.connswatergreenway.co.uk.