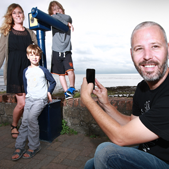 
A popular Dutch ‘Instagramer’, Eelco Roos, was in Northern Ireland this week, as a guest of Tourism Ireland. He was here to capture lots of great photos and share them on Instagram, to highlight some of the many great things to see and do here to prospective holidaymakers in the Netherlands. Instagram is one of the latest social media channels, which allows users to share their photos in a fast and fun way.

Armed with his smartphone, and following an itinerary designed by the Northern Ireland Tourist Board, Eelco enjoyed a visit to Carrickfergus Castle before heading along the Causeway Coastal Route to photograph some of the spectacular scenery and attractions along the way, including the Carrick-a-Rede rope bridge, the Giant’s Causeway and Mussenden Temple. Eelco also spent time in Belfast – exploring Titanic Belfast, SS Nomadic and Belfast Zoo.

Aileen Hickey, Tourism Ireland’s manager in the Netherlands, said: “With over 282,000 followers, Eelco Roos is the most popular ‘Instagramer’ in the Netherlands and we are delighted he agreed to spend time in Northern Ireland capturing photos and sharing what a great place it is to visit. Tourism Ireland is working hard to maximise the impact of social media, to highlight Northern Ireland as a wonderful holiday destination. In the Netherlands, we are communicating with over 74,600 people – or potential holidaymakers – on a daily basis through Facebook and Twitter, to inspire them to come and visit.”

Eelco’s images can be seen on http://statigr.am/croyable and will be shared by Tourism Ireland on its Facebook page and Twitter stream in the Netherlands.