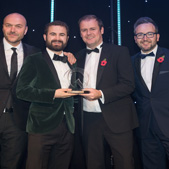 
Spicy spuds were the order of the day at The Quality Food Awards in Mayfair London, as Mash Direct from Comber, County Down, scooped the prestigious award for their Chilli Baby Bakes. This win was all the more spectacular as there was over 300 products being considered, and the family run farm was competing with retail giants such as Marks and Spencer and Aldi! The last couple of years have been an overwhelming success for Mash Direct as sales of the Chilli Baby Bakes have doubled since last year alone, with sales in England and Scotland rising to 212%. But their success is not limited to the UK as the spicy spuds have even been making an impression in places such as Dubai, where 18,000 were sold this year.

Jack Hamilton picked up the award at the ceremony in London and said; ” Our tastes are always changing and we have found that our Chilli Baby Bakes are a big hit in Dubai with European expats, as well as Indian and Pakistani expats looking for tastes from home with a twist. As we continue to see more world food trends here at home we are working hard in the kitchen to innovate and give shoppers the taste and variety they want on their kitchen tables”.

The award was presented to Mash Direct by celebrity chef, author and TV personality Simon Rimmer at the Grosvenor Hotel in London, and g

uests were entertained on the night by Britain’s Got Talent stars Boogie Storm, with their popular dance show.