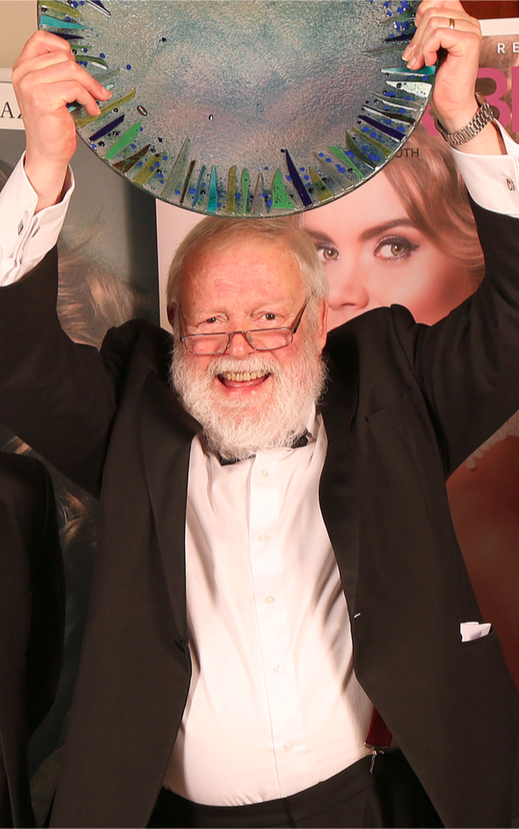 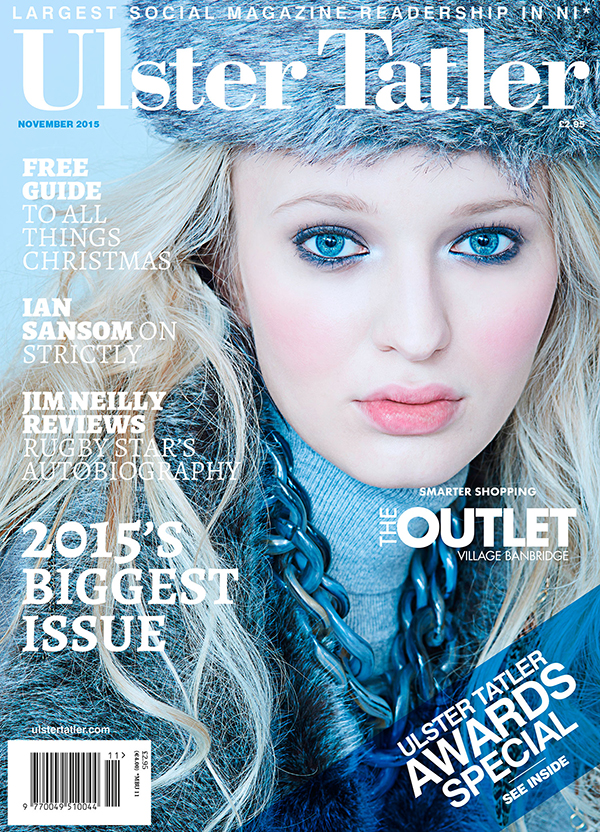 
Discussing poet Michael Longley’s tenure from 2007 to 2010 as Ireland Professor of Poetry, we agree the title is grand and therefore rather nice. “Sounds important, doesn’t it?”, the great man says with a smile. We agree the next, deserved step up would be World Professor of Poetry. He laughs, infectiously, although he’s suffering from a bout of bronchitis and occasionally has to stop the interview, which he didn’t want to postpone, to as he puts it “explode”.Of course, the step up from that would be poetry god. Michael Longley, our premier poet since the death two years ago of his great friend and colleague Seamus Heaney, is a definite contender. And the man who is a classicist and sits in a study surrounded by just some of his and literary critic wife Edna’s 3000 books, looks a bit like a Roman sculptor’s version of one of their gods, say Hercules.

Longley, who has a couple of TS Eliot awards and many honorary degrees to his name, has just won the Ulster Tatler’s 2015 Lifetime Achievement award and says he is thrilled about the gong. “I’m delighted, really very pleased to get this for a lifetime’s work, and am thrilled t

o be receiving it on the night the boxer Carl Frampton gets his award and also to be alongside successful entrepreneurs. That shows poetry is a normal human activity, part of everyday life as I believe it is. And as the great Irish poet Patrick Kavanagh once said, when a young man dabbles in verses, they become his life.”

That’s certainly true of Mr Longley who has, you could say, dabbled to good effect. We start at the beginning of Longley’s brillliant career and he reveals that some of the first poems he wrote as a teenager were, unsurprisingly, chat up lines. “I fell deeply in love with a Methody girl called Pat when I was sixteen. After she ditched me, there were two or three other lovely Methody girls. I remember writing a poem at that time called ‘Song of a Watchman’. We had watchmen in the city then who occupied huts surrounded by lamps. The ending ran ‘I can’t desire what is not mine/From things in reach are out of sight.’ Not bad for a first try.” The skill was naturally there from the outset.

Longley was a jock and an aesthere, playing rugger at school (BRA or Inst) and reaching the first team. But the tender emotions prevailed. Edna Longley, the non Methody girl Longley loved and married, is referred to by her husband variously as “the brainy one” and the PA. She makes us strong tea. Longley’s account of how he met his wife is as romantic as the poems he’s written to her over his long career. He studied classics at Trinity College, Dublin, and was glancing out of a window one day when he spotted a girl with raven dark, Irish hair. “I saw this girl walking along who had this raven’s head of dark hair and said to one of my fellow students ‘Who’s that?’ He said ‘Oh she’s brighter than all of us, she’ll get the top degree.’”

“It was a very close friendship between me and Seamus although of course there was competition too.”

They didn’t get together immediately because Longley was, as he amusingly puts it, damaged by his longing for all those Methody girls. But he eventually used the old ruse of asking for a comment on his work. That is, the poems, which she still sees first, before his editors at Faber have a chance to comment. He says fondly: “She was very gentle, and generous. It went on from there, much to my delight.” Michael Longley is uxorious and he and his wife are clearly still an item. Talking to him about their marriage is quite moving as he recounts their wedding day and a resulting poem. “Marrying Edna was the best thing I ever did. We got married in December 1964 on a cold and windy day at the church in Dundalk. I wrote a poem, ‘Pattern’, about that.” When he reads it, you get the relationship and the love. The lines about the figure-revealing wind and the way he revisited their special day after finding the old Vogue pattern that Edna Broderick had used to make her wonderful, box pleated wedding dress, are glorious.

“Thirty-six years, to the day, after our wedding… I find in its fat envelope / The six-shilling Vogue pattern for your bride’s dress,/ Complicated instructions for stitching bodice/ And skirt, box pleats and hems, tissue paper outlines,/ Semblances of skin which I nervously unfold/ And hold up in snow-light, for snow has been falling/ On this windless day, and I glimpse your wedding dress/ And white shoes outside in the transformed garden/ Where the clothes-lines and every twig have been covered.”

Love poetry doesn’t get more special. In the room enhanced by Longley’s youngest daughter Sarah’s superb portraits, he goes on to say he and Edna have gone on to have three children, Rebecca, a headhunter, Daniel, a molecular biologist working in cancer research and Sarah, the artist. They now, of course, have several grandchildren and some of the poet’s most tender recent work details their conception, birth and growing up.

When you have the chance to talk to a literary legend, you have to ask one or two big questions. Why do we need poetry, for example. Longley has a twinkle in his eye and is a humorous man, which is clear in his answer to the question. “The interesting thing about poetry and the arts is that they’re useless. Which doesn’t mean to say they’re valueless. I like Cyril Connolly’s definition when he

compared the arts to a small gland in the body like the pituitary gland. It appears small and unimportant but if you remove it, the body dies.” Then Michael Longley loses the smile and gets serious about the art that is his lifetime’s passion. He has written poetry his whole life except for a fallow period in his forties when he worked in arts administration, adding he was unhappy and drank a bit. He quit the job and the muse returned. “Societies ruled by dictators like Hitler and Stalin who wanted to do away with the arts and any opposition they represented did not prosper.”

Longley has an English background and his father, who was a furniture salesman travelling around Ireland north and south selling three piece suites, brought the family to Belfast for work. Michael says fondly that his dad, Major Longley who fought in both world wars, was one of those Englishmen the Ulster people actually liked. Longley was educated at Trinity College Dublin. He returned north after taking his degree and became part of a group of writers encouraged by Queen’s University English don and noted critic Philip Hobsbaum and known simply as the Belfast Group. We have to discuss Longley’s long and warm relationship with Seamus Heaney.

On a golden evening at a literary festival in Magherafelt a couple of weeks after Heaney’s death, Michael Longley stepped into the slot that was to have been occupied by his friend and delivered a blinder of a tribute. Both sad and celebratory, the resulting reading recalled Yeats’ poems that namecheck the key ones who have gone before. “I remember the evening. When I joined the group, the important thing was really about meeting Seamus, and he and

Marie Devlin, his wife to be, and Edna and I formed a kind of quartet. Seamus drove a Volkswagen and I didn’t drive, but we’d go about the country to pubs and restaurants together. I like Guinness and whiskey too, I’m afraid. It was a very close friendship between me and Seamus although of course there was competition too. I don’t think poetry is written in isolation and there’s no solo flight but we were both aiming for excellence, catching the vector flights upwards, raising our souls.”

Michael’s other friend and soulmate, although I suspect he wouldn’t use the term was his twin Peter who died a couple of years ago. He says now: “I was with Peter when he died. Having a twin is a big deal, losing him was a big deal. Being with him as he died, I wondered if I’d ever write about the experience, but in the end I wrote a lot of poems, a kind of sustained lamentation.

I’m pleased I was able to do that and sent them to his widow Catherine and my older sister. They said they’d treasure these poems. There are quite a lot of classical references too.”

Longley notes that when Seamus Heaney died, he felt the same cataclysmic sense of psychological amputation. “It was very like losing Peter. Seamus and I had done a reading down South a couple of

weeks before he died. It was a glorious evening, we didn’t go one poem from each but did chunks of work. I remember I sent him a card saying how pleased I was, and now I am so glad I posted it. On the day Seamus died, and I had no idea he was ill, a woman rang up from Radio Ulster and told me the news. She then asked for my reaction and would I say a few words. I said no.”

Victor Hugo once said that poets are also philosophers and historians. That is certainly true of Michael Longley. ‘Ceasefire’, which he reads to us after the interview with superb phrasing, is possibly Longley’s most famous poem. It takes on the Northern Irish Troubles by way of his classical education and imagines Achilles, who has lost his son Hector to Priam, managing to welcome the fellow warrior and acknowledge his status while still retaining the stain of grief. “It is, I suppose, my best known poem.” Longley says. It presents the two alpha males as spiritual contenders, both affected by the fight, both almost attracted to their status, and he says they square up as lovers do, admiring the other’s beauty. The final couplet, famously published a few days before the IRA ceasefire, runs: “I get down on my knees and do what must be done / And kiss Achilles’ hand, the killer of my son.”

Finishing up in leafy BT9, where we have to ask the gardener to stop cutting the grass on his tractor style lawnmower because of the noise,  we talk about food and how Michael and Edna relax. “I do a good gently spiced curry but I don’t do vindaloo, all that stuff about proving your masculinity via spices.”

And the final question, about how Michael Longley would write his own obituary, produces the following insight. “I’d like to be called a poet more than anything else, for people to say I was good fun and a loyal friend. Also somebody who cared about nature and animals. Most importantly, I’d like to be remembered as a good father and would like my long relationship with Edna to be seen as central.”