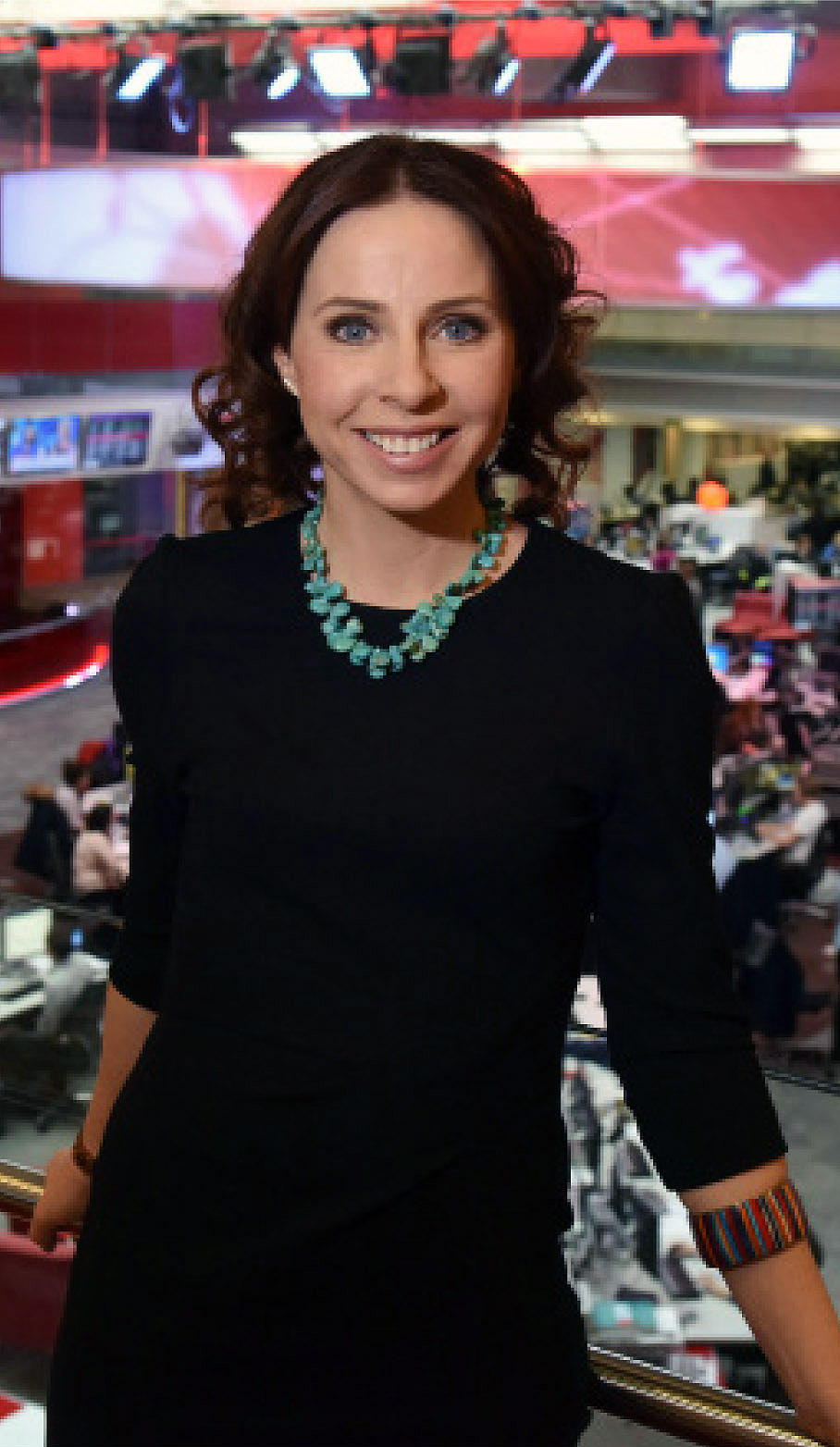 
When working in children’s telly, it helps if you remain in touch with your inner kid. The best presenters in the business, from John Noakes to Floella Benjamin, always have. Fermanagh born Rachel Horne (37) who began her stellar rise onscreen as an anchor on CBeebies, ener
getically agrees down the line from London. “Yes, on Newsround, we
always used to imagine a nine-year-old viewer, and we’d think how to present stories like a terrorist attack or a missing child to

him. He would be interested in the truth and the world but would probably still be sleeping with a teddy bear.” We discuss whether any topics such as Yewtree would be taboo but Ms Horne thinks not. “No, and programmes like Newsround, which is very well respected, have links to things like Childline and the NSPCC.”

The mother of three is currently performing the juggling act familiar to many working women. “It’s a bit crazy, all about work and family”, she admits. The Horne family are due to jet over to see family in Northern Ireland the weekend we speak. “My brother and his wife have three girls and live in Moira and my parents are in Fermanagh. We’ll be seeing them when we go over today and I do miss the closeness of family. Northern Ireland is only a low cost airline journey away but with five of us it’s not that low cost in the end.”

“My Husband who is much shyer than me when we go out but not when he’s working, obviously, gets recognised more than I do”

These days Rachel Horne deals with grown-up news. As a good BBC employee, Ms Horne says, when asked if she’s Trump or Clinton a week before Trump’s shock victory in the US Presidential election, “Can’t say”. She adds: “I don’t think anybody can as so much in the campaign has been changing. My good friend Amanda Walker on Sky is covering it.”

Her brief is business reporting now and she is about to do shifts anchoring BBC Breakfast alongside Sally Bundock, whom she describes as a “very generous colleague”. Rachel Horne works part time to accommodate her family life with the “three little ones”. They are Thomas (7), Barnaby (5) and Dara (4). The family – Rachel, comedian husband Alex Horne of BBC Radio 4 Horne Section fame, and sons live in Chesham, Buckinghamshire. It’s pure Home Counties and she likes the environment. “You can chill there but it’s on the Tube and you can get into London in 50 minutes .”

Rachel Horne’s first foray into the media was via work experience at BBC Northern Ireland. The Cambridge graduate who studied law – “my dad was a judge, and the dinner table conversation on the subject was interesting as a topic, but not as a career” – switched topic and career choice. “In my gap year, I’d taught English in Vietnam and worked at Corrymeela (community centre) which I really enjoyed.” So Ms Horne turned to theology. It was a small department with around 30 students in Rachel’s year. “We learnt comparative religion, with Holocaust issues on the syllabus.”  After that, the woman headed to Ormeau Avenue and journalism. “I shadowed Martina Purdy, who’s now become a nun, and Mark Simpson. He was brilliant, encouraging and inspiring. I’d done a postgraduate journalism course and knew I really wanted to go into that.”

Ms Horne had a couple of encounters with Prime Minister Blair early in her brilliant career. She was working as a runner for national BBC and just before going on air, people realised Tony Blair had left his jacket in the green room. “I had to run and get it for him. Funnily enough, three years later, I got to inter

view him for Newsround as part of a piece on education. It was all very cloak and dagger and they didn’t tell you who you were interviewing until he arrived by helicopter. He was lovely and very professional but I am not sure he remembered me.” Was Tony Blair charismatic? “Yes”, she comments briefly.

Rachel Horne met her comedian husband at Cambridge, so I wonder was theirs a coup de foudre and instant connection. She laughs. “No, we met in freshers’ week but it took him two years to come to his senses.” They live in his part of the world because as a successful comedian, he needs the larger audience. “We realised it could only work if Alex and I lived near London but I do get homesick. I was over in Belfast a month ago, staying with my brother, and going to the MAC. The good thing about living in the country near a small town is that I can more or less give the boys the freedom I had growing up.” Rachel Horne goes on to talk about her sons’ primary school and the way she gets to do the school run part of the time. “As Alex’s career took off, he couldn’t be based in Northern Ireland. But the free, rural childhood was really important to me so we decided not to live in central London. It’s too built up, too concrete. Living here, my friends are only three quarters of an hour away.”

Bill Clinton is another big political beast Rachel Horne has encountered. “It was one of the times he was visiting the UK and when I was shadowing Martina. I was just the work experience person but at the BBC in Northern Ireland, they bent over backwards to help you. I didn’t get to speak to him but got a sense of the si
ze of the event.”

We bat around the question of women being unfairly judged in the media, with their looks getting the sort of scrutiny somebody like John Sergeant wouldn’t have got. But she says that things are changing. “In terms of appearance, you have to look professional, especially in News. You’re doing a job and if you aren’t dressed appropriately, it matters. I go to Marks & Spencer’s a lot as they do great dresses. If I want to treat myself, though, I love a bit of Whistles.” On the question of ageism in the media, Rachel Horne again says she is hopeful about the future for her generation. “I do feel quite optimistic. I was in TV in my twenties, had Thomas when I was 29, took a year off with my first two boys, then two years with the third.”

On the thorny question of the regional accent, Rachel Horne is equally upbeat. Her voice iswarm and has a soft Northern Irish inflection. “People at home think it’s not a strong Northern Irish accent but people in England do. They say they can always tell when I’ve been speaking to my mother at the weekend as it gets broader!” Working in BBC news, Rachel Horne sometimes works with fellow Ulster woman Annita
McVeigh and a Northern Irish producer, which she enjoys.

Asked whether she socialises with the Northern Irish media types in London, Rachel laughs and admits to knowing Paddy Kielty slightly. There is an anecdote attache
d, as she explains, “I’ve worked with him on Radio 2 and he is lovely. When I was in my late teens, I remember a girlfriend and I were out after a U2 concert.” Her friend’s brother lived on the same street as the Kielty family. “There were sofas out in the street and me and my friend knocked on his door, the way you do when you’re 18.” They made a lame excuse, asking Kielty, who’d answered the door, if he knew the number of a taxi firm. “He saidno. We then asked him if he was having a party and could we come? He said ‘yes’, then ‘no’, and shut the door!” Ms Horne laughs at the memory, adding that when she interviewed Kielty years later, he said he didn’t recall the incident.
In terms of the fame question, and getting recognised, Rachel Horne says there isn’t an
issue in the family as it’s her husband who gets the ‘My God,  it’s him!’ reactions. “My husband, who is much shyer than me when we go out but not when he’s working, obviously, gets recognised more than I do because of what he does. And when the boys see me on TV, they just say ‘Ok, Mummy, whatever.’”

She does not think her sons have inherited their parents’ performing gene. “They are all quite distinct. Tom is very thoughtful and loves reading, Barney is quite creative and imaginative, he loves Superheroes. And Dara is a crazy four year old.” She adds that he woke up one night in the gap between waking and sleeping and said something interesting. “He said ‘I’m in the garden and everything is made of soup.’ I said, ‘Go back to sleep.’”

When Rachel and her family are visiting her brother, they go to Wine and Brine. “Last time we went it was fantastic. They do great cocktails and I had a sensational gin-martini.”