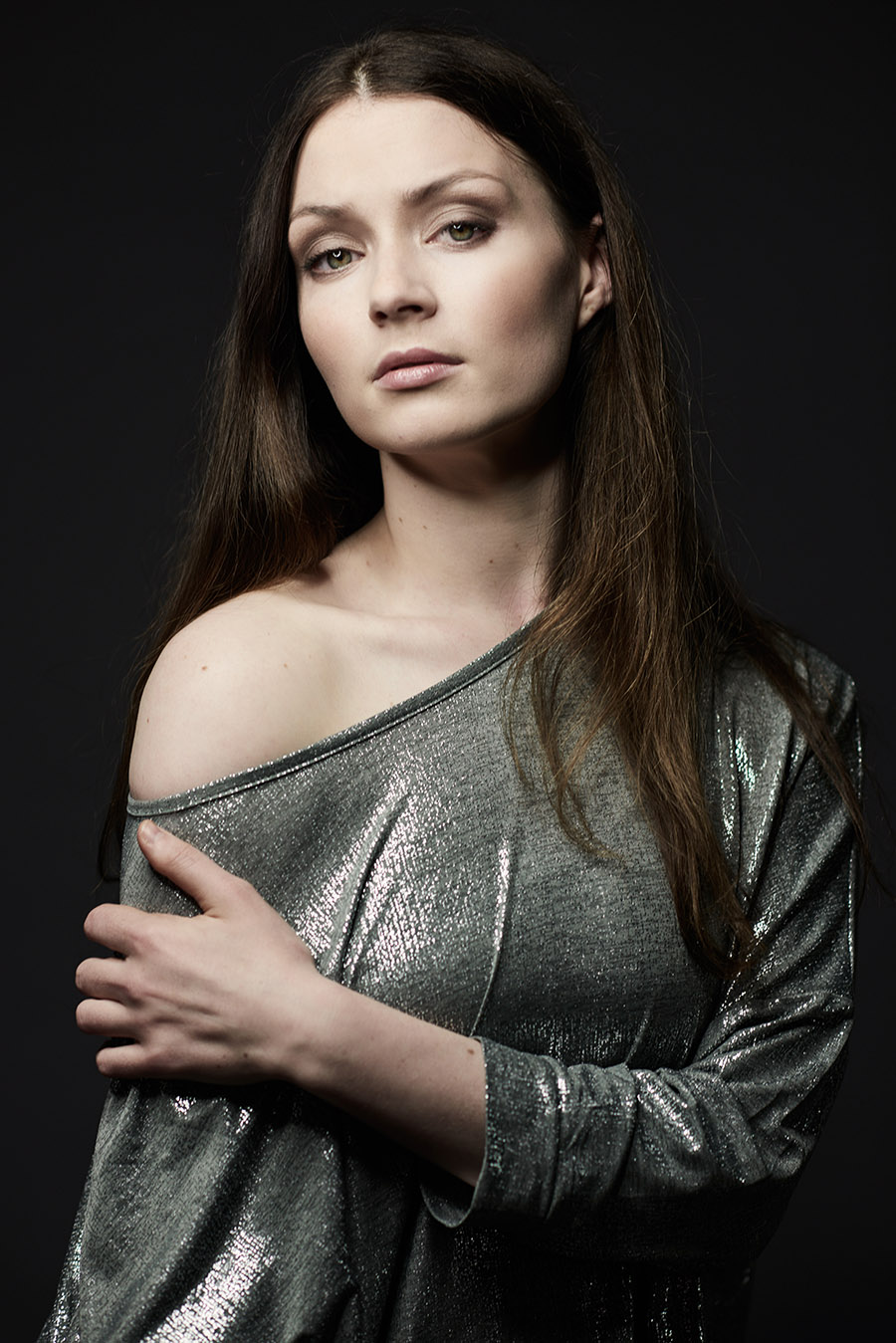 
Belfast-born Christina Bennington talks about spending Christmas in Toronto and the life changing experience of taking on the lead in the hit musical Bat Out of Hell.

How do you describe the high-octane buzz following an actor’s career-changing performance without dusting off the cliches? You ask the person involved. When Belfast born Christina Bennington landed the role of Raven – the lead in the musical Bat out of Hell – in the spring, she stepped onto one of the biggest stages in the UK. Christina says now the implications of getting her dream job arrived slowly. “When you’re inside your dream job, you don’t initially realize it. But now I think ‘I’ve been playing the lead in the London Coliseum, I’ve been going out night after night in front of 2000 people, gaining standing ovations’. If I’d told myself when I was at school I’d be doing this…it is unbelievable.” She stops, seemingly still pinching herself at the way her career has taken off. Beforehand, Ms Bennington was understudying one of the leads in Show Boat. Afterwards, it was appearances on iTV shows Britain’s Got Talent and Live at the Palladium, meeting celebrity fans and the whole media circus. Christina modestly describes it as “madness” when we talk over coffee in the city centre. We can’t reveal her age as the theatrical illusion of her 18-year-old alter ego has to be preserved. But Christina, who has been outed as in her mid-twenties, says: “It’s the brand, but I am relatively young to be doing the job I am doing. I don’t mind people guessing but it’s nice for me to continue doing the job as long as possible.”

This particular star was born while singing Jim Steinman’s gutsy numbers, made world famous by Meatloaf, on an excessively theatrical set. They have reworked the numbers to fit a storyline about the love between Strat, the permanently youthful leader of The Lost, the rough diamond who falls for privileged Raven, daughter of tyrannical ruler Falco. Christina says proudly: “we’ve got everything, fire, motorbikes, a car”. And, naturally, bats. The reviews confirmed Christina Bennington’s new status, with The Times’ critic dubbing her “enchanting” and The Guardian’s man in the stalls saying she gave more life than the writer has to the stereotype of a pampered daughter. Christina says that when you are doing eight shows a week, you are protected from the fuss. Or maybe it’s just controlled. “We are very well looked after, we have connections with Jim Steinman and Meatloaf but the fact it’s a new show means you do a lot of publicity events.” Asked whether these are fun, Ms Bennington says yes, but they can also be quite terrifying. “We filmed Live at the Palladium first, singing the title song, Bat Out of Hell. You feel very safe on your own set and stage and it was out of our comfort zone. We had static bikes, not bikes on tracks, we didn’t have the props and were doing a cut version of the song.”

Enjoying a few days off between previewing Bat Out of Hell in Canada and heading to the Ed Mervish Theatre, Toronto, to launch an autumn run, Christina says the job has allowed her a bit more time in Belfast with her family. She is also doing a lot of running and finds time to get her hair done. “I pop into Conroy to see Stephen Aiken for my colour when I’m home!”  So doesn’t she regard London as home? She answers: “Like a lot of actors, I live in London, but I also go back to ‘home home’ which is Belfast.” She adds: “In the last few months or so I’ve been home more than in the last five years. When you’re auditioning, you can’t fly home. The amount of money I have wasted on flights because of auditions, ask my mother. Then when you’re working, you just get one day off per week.”

Ms Bennington’s success is not overnight, as she’s said. She has put in the hours, training in musical theatre at the Guildford School of Acting and working her way up the ladder. She did Oklahoma after college and also appeared in a version of Dickens’ Christmas Carol. One of the casting directors saw her in Show Boat and wanted to call Christina in to audition for a rock musical. But she wasn’t sure the genre was right for her voice. “All I’d done was soprano shows. Then they wanted to see me to understudy Raven. I said I wasn’t interested in understudying any more.” Impressed by this woman’s determination, the powers that be called Christina in to try out for the main role.

At home in Crouch End, Christina learnt she’d got the job at midnight. It happened by accident, thanks to social media. “A couple of theatre journalists posted about the show using my photo.” So Christina phoned her agent, got the confirmation, then wondered who to phone next. “My house mates weren’t around, so I phoned my mother.” Her mother’s reaction down the line from Belfast in the middle of the night was more or less ‘That’s nice, dear’. Christina elaborates: “I said ‘Mum, I’ve got the lead in Bat Out of Hell. She said ‘Oh lovely. How was the show tonight?’ I said ‘I don’t think you understand what this means.’” It took a couple of days for the big news to sink in.

This musical contains the kind of choreography that would definitely excite Bruno on Strictly. Watching the two leads, Christina and her co-star Andrew Polec, stalk each other in the build up to the big kiss at the conclusion of For Crying Out Loud, it’s amazing to learn the erotic moves have been generated by the actors themselves. “That’s our favourite number and the choreography is all us,” she laughs. “We really worked on the physical language for the moment Strat and Raven meet up at the start of act two. Our brilliant director Jay Scheib gave us hints – roll over at one point, kiss her feet – and got us to the point we had no inhibitions left!” Christina says when acting love scenes, it helps if you get on with your co-star. “We’re very close and I’m lucky Andrew is so wonderful to work with but there’s nothing less romantic than stage kissing. It’s very sweaty.”

Celebrity encounters are a given these days. Christina has met Meatloaf, aka Michael Lee Aday, a few times, most recently the week before the interview. “He sang with us onstage during the taster performance in Toronto in front of 5000 people in the street which was unexpected. Meatloaf is so interesting and generous and gave us a great piece of advice during the press junket we did. He said you have to commit totally to the show, with every fibre of your being, if you don’t it becomes a cliche because the emotions are so big.” She has also chatted to Simon Cowell. “He’s a very nice man.” And JK Simmons, the teacher in Whiplash, dropped by. But Christina was most excited to meet her favourite author, Harlan Coben, after he’d seen Bat Out of Hell. “He Tweeted that he was coming to the show, I Tweeted back I was a big fan and he direct messaged me. Everyone was laughing but that was the coolest.’” Mr Coben brought in a signed copy of his novel, Home, as a present.

In between shows, indefatigable Christina has also been conducting workshops. “I did one Bat Out of Hell workshop for two weeks, from ten to five every day, then took a taxi to the theatre to warm up. It nearly killed me but I like pushing the boundaries. And in my two weeks off, I played Pearl in Starlight Express in five public performances. Andrew Lloyd Webber was working up some new material and he asked me my views on the music. You don’t realize how surreal that is until later when you post pictures online and people say ‘That’s Andrew Lloyd Webber.’”

You wonder where Christina gets the energy. She says it’s partly the “adrenaline rush” which is life affirming, and that when they opened in Manchester, she used to go to the gym after the show simply to wind down. She also believes in a fitness routine. “I do Pilates and yoga, go to the gym for cardio and weights based routines. When you’re performing eight shows a week, it’s no alcohol and drink lots of water. I can’t handle the party scene, you really have to take care of yourself and your voice and take time to rest.” Christina was destined for the stage from an early age. At five, she acted the queen of the mermaids in a production at Fullerton House. “They asked who wanted to do it. I said me as I already had a costume, although I didn’t. My mother Catherine who makes costumes for the Lambeg Players quickly made me something. I realized early on you just say yes.”

The Bennington family – father Ian who runs the consultancy PART TWO Design, mother, younger sister Karen and younger brother John – were all keen members of the Lambeg Players. “I remember hanging around the panto set before I was old enough to be involved. My father Ian has a great voice, as do my uncle Paul and cousin Amy.” In P1 and 2, Christina got involved with drama, sometimes helping choreograph shows in the senior school. While at Methodist College, where Christina was head girl, she was given free rein by her drama teachers Maria Hunter and Jane Conlon. “They let me choreograph plays in the third year and gave me a lot of responsibility.” Christina was also involved with the school choir under Ruth McCartney which won the RTE All Ireland title. “We sang in Westminster Abbey and the levels of musicality are something I haven’t seen professionally.”

The Meatloaf repertoire, familiar to Christina from hearing it in her father’s car, has brought its fan base to her stage door. She says some people are coming to the theatre for the first time. “If people are making the journey, paying for a babysitter, for a hotel, you have to bear that in mind and make sure these people have a life experience. We also meet people who have lost parents who loved Meatloaf’s music. They say ‘It’s brought a bit of them back tonight.’”

Christina’s ambition, when she’s older, is to play Mary Poppins. “It’s the most inspirational show. Although I want to do new work, I would love to work on that show, how could you not. I saw Laura Michelle Kelly in it, probably three or four times. The pop-up house programme is still at home in Belfast.”

Christina says she’s been working out her Toronto first night outfit and reveals she likes to wear red at premieres. “Raven wears a lot of red, it’s a passionate colour, and it works.”  Christina says Christmas 2017 will find her in Canada with the show. “I’ll be FaceTiming my family as I miss them a lot when I’m away.” It’s very different from Ms Bennington’s Christmases when she was growing up. “It was always about going to see Granny and Granda Bennington and hanging out with my amazing cousins. Now we have them over to ours and my sister cooks up a storm, producing five vegan desserts last year just for me!” She says she also enjoyed the spiritual soundtrack of the Nine Lessons and Carols – “a major highlight of my Methody choral experience”. This year it’s Bat out of Hell all the way and Christina says there are billboards all over Toronto, plus a lot of media interest.. But at the end, before returning to Twitter, she smiles and says: “It is just madness, isn’t it?”