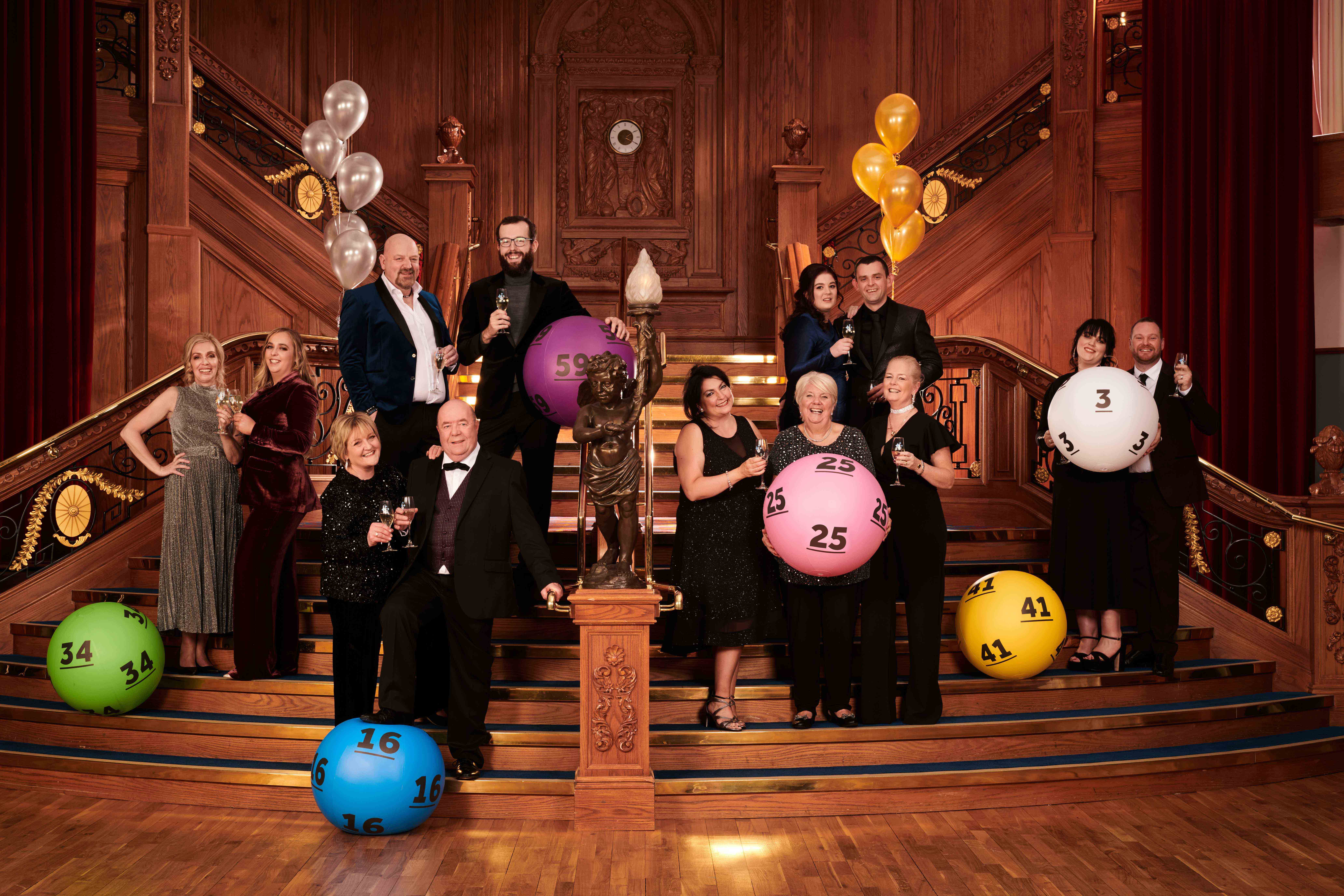 
To mark the 25th birthday this month of The National Lottery, a group of lucky winners from Northern Ireland gathered at the part lottery-funded Titanic Belfast where they posed for a unique celebratory photo on the famous Titanic Staircase.

The first-ever National Lottery draw was held on 19 November 1994 and, since then, an amazing 133 lottery millionaires have been created in Northern Ireland,

Included in the lottery line-up were:

Mary Hamilton from Belfast won a massive £12,935,936.30 in the EuroMillions draw on 7 November 2014.  Working for Belfast furniture store Bannons, Mary and her husband Alexander (Sandy) had been collecting money from customers every day for more than 30 years – until she finally collected an amount beyond her wildest dreams.  After winning, the couple rewarded all their faithful customers, as they said they would, by paying off their outstanding balances.

Derry-based inventor Anne Canavan had her very own ‘Eureka’ moment after scooping a life-changing £1,000,000 in a EuroMillions ‘Mega Friday Draw’ in September 2015.  As well as pocketing the cash, Anne also won as an exclusive luxury ‘Private Island Getaway’ for herself and her four children on the tropical paradise of Song Saa Island in Cambodia.

Retired couple Colin Bell and his wife Eithne scooped a huge £1,000,000 in the EuroMillions UK Millionaire Maker draw on 20 June 2017.  Former teacher Colin, and Eithne, a retired nursery school worker, were settling in for a quiet night in front of the telly when their evening took an unexpected but remarkable twist. Now Colin and Eithne devote their time to the Kevin Bell Repatriation Trust, which they founded in June 2013 after their son tragically lost his life whilst in America. The charity has since helped repatriate the bodies of hundreds of Irish people who have died suddenly overseas.

Nursery Assistant Claire from Ballyclare couldn’t believe her eyes when, in February 2015, an impromptu stop at a service station on her way to a work training day resulted in a life-changing £250,000 win.

A shopping trip for charity turned into a Christmas that Derry housewife Stephanie Harkin will never forget after striking it rich on a National Lottery Scratchcard on 17 December 2015.  Stephanie, from Drumahoe, was in her local Tesco store buying Christmas presents for a school charity project when she decided to pick up a Diamond Riches Scratchcard and bagged a massive £100,000 in the process.

Bangor man Stephen Inglis was one of two County Down binmen who collected a tasty £70,000 from a National Lottery Scratchcard in August 2016.  Stephen and Frank McCormick from Newtownards had a diet plan to thank for fattening their bank balances, after ‘binning’ their usual sausage rolls in exchange for lottery gold.

As The National Lottery celebrates 25 years, Northern Ireland is officially one of the luckiest postcode regions in the UK, ranking second out of 121 UK postcodes in the overall league table of National Lottery millionaires, with 133 millionaires created here since the first Lotto draw on 19 November 1994.

Interestingly, more than a quarter (34) of all Northern Ireland’s millionaires to date have been made in the past three years*, making this officially the luckiest period ever for local National Lottery players, with a ticket-holder from ‘our wee country’ winning a million pounds or more EVERY 32 DAYS ON AVERAGE (basically one a month!).

The ‘luck of the Irish’ could not have been better illustrated when, in January this year, Moira couple Frances and Patrick Connolly became one of the biggest ever National Lottery winners after scooping an incredible £114,969,775.70 EuroMillions jackpot on New Year’s Day.

Northern Ireland is also one of the luckiest postcodes nationally for big winners of £50,000 or more, ranking 3rd in the UK over the past three years and 6th since 1994. A life-changing amount of £50k or more has been banked by no fewer than 788 players in Northern Ireland, at a rate of ONE EVERY 11.6 DAYS ON AVERAGE.

Across the last 25 years The National Lottery has had a transformational effect on the United Kingdom.  A staggering £40 billion has been raised for Good Causes with 565,000 grants made across arts, sport, heritage and community.  That’s the equivalent of 200 life-changing projects in every UK postcode district. Players have banked a whopping £71 billion in prizes and a staggering 5,500 millionaires have been made.

In Northern Ireland alone, more than £1.2 billion has been awarded in National Lottery grants to more than 25,000 individuals, organisations and projects across the province.