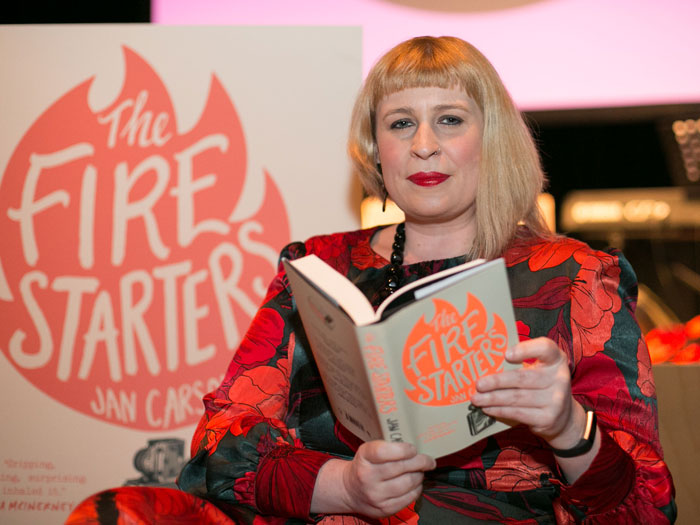 Summer In The City


Jan Carson’s novel, Fire Starters, has gained rave reviews for its portrayal of a dystopian Belfast. She discusses magic realism, male narrators and her passion for Agatha Christie with Jane Hardy.

Roddy Doyle signed off his review of Jan Carson’s new novel, Fire Starters, by saying she’d created a whole new version of Belfast in her “gripping, surprising, exhilarating” fiction. He’s not wrong.  Although the summer epidemic of gigantic bonfires bears some relation to our summer headlines, the  “unfortunate children” who pop up, including a little girl with wings and a boy born with wheels under his feet (“greased lightning on the hills”), are off any realistic graph. The plot concerns fathers coping with problem children, one a possible siren-baby equipped with lethal charm, the other a boy addicted to violence. It’s a funny, scary, persuasive, dystopian world.

As Jan (39) says over coffee in one of the cafes she regards as the office, her first words indicated the imaginative dilemma. “The first sentences I wrote were ‘This is Belfast. This is not Belfast.’” The hesitation is partly because, as Ms Carson explains, she can only see her version of the city. “There’s no fixed reality. There are 100,000, or 500,000, different versions of Belfast.” Magic realism is her bag and as she says later, she can’t understand why we’re so hooked on realism.

“I am probably a magic realist first and foremost and love the absurd, the ultra-real, the exaggerated take on reality.”

She values imagination – “it’s what writers do” – but reveals she got the inspiration for Fire Starters on a writing tour. “The idea came when I was giving a talk in Washington DC about bonfires and some of the symbols of Loyalist culture. I began to talk about these sixty to seventy foot bonfires, and people in the audience said they were magic realism too, which I’d mentioned. That was when the spark went off, no pun intended.” She adds: “There is something magical about them in the true sense, that is fantastical. They’re large like the Lambeg drum.”

Born in Ballymena, Jan Carson now lives near the Holywood Arches in east Belfast. She says: “I live in a terraced house and the very physicality of our spaces blurs the line between public and private. I’ve been thinking recently about writing about things from within. You feel physically placed in a community unlike in suburbia where there’s a lot of distance between people. I can hear my neighbours and my front door opens onto the street.”

The novel is relayed by two men, Dr Jonathan Murphy, father of water baby Sophie, and Sammy Agnew, ex-killer and father of his spitting image son, Mark. Was taking on the male voices tough? Apparently not, as Ms Carson explains: “I actually find it easier to write as a male. I don’t know why but think because I am a woman, there’s a responsibility when writing as a woman to get all the aspects right. Writing as a man, there’s not the same pressure.”

The relationships between the fathers and their offspring are superbly done. Carson describes the doctor cradling his child – “she curls into the corner of my neck to doze” – and his fears about her future, then makes you feel the tension in the Agnew household as the older parents hear their murderous son walking about his room. “Neither of them loved Mark. It was entirely possibly no one in the world loved Mark.” Jan Carson, who doesn’t have children herself, reveals she drew on her experience at home for the positive stuff. “My mum was a childminder so when I was growing up, I was always carting a baby around.” She adds that her niece and nephew, now eight and 11, live down the road. “They’re beyond the carting around stage but I’ve been there from day one as a very hands-on aunt. It’s much better than actually having a child.” Jan Carson is writing a young adult book with her nephew, Caleb, who is 11. “It’s about the near future in Belfast and is dystopian.”

The Fire Starters isn’t a post-Troubles book but addresses the continuing divisions through its characters’ lives. The recent death of writer Lyra McKee recalling a tough past exacts a thoughtful response from Jan Carson.

“One of the things I wanted to say here was peel back the layers. I didn’t know her but when something like Lyra’s death happens, it’s very easy to point the finger and blame the people who were directly responsible for firing the gun. Yes, there is a level of blame there, but you have to question the society behind that. I wanted to think about the young men, and have written passages about the community in east Belfast. I wanted to challenge the idea that people join the paramilitaries for one reason, because of a creed. It’s because they want community, and they like violence. Getting back to Derry, those young men are a product of lack of community and unemployment.”

Ms Carson, who came to writing late at the age of twenty-five, has always had plenty to do. After Cambridge House Grammar School, she attended Queen’s University, studying English, then theology for a Master’s degree. “I come from a Presbyterian background and I’ve always been interested in religion. I worked for churches for several years, always in the arts. My dissertation was about Bob Dylan and the rhetoric in the gospels. It was great fun to write but totally useless. I did one article on the back of it so it’s hardly made my fortune,” she says with a laugh.

Creatives nowadays don’t exist in garrets; they travel the world discussing literature and work hard in community arts or education. Jan Carson’s CV contains an impressive range of jobs. She went to the States in 2005, returning only when her work visa ran out in 2009. While there, Jan started an art house cinema and can still work the projector. She has also been an arts co-ordinator for elderly people, some dementia sufferers, for several years. But Ms Carson rejects the idea she got into this because of family members experiencing the illness. “Honestly, no. I slid into this as I was working at the Ulster Hall and ended up organising all their tea dances. If you’ve worked with teenagers then old people arrive who are not sullen and they thank you for things and bring buns, it’s nice.”

Jan Carson’s interest in language also made her keen to understand how those with aphasia and increasingly gappy vocabularies cope. She became interested in the linguistics and is conducting research into the subject. Unsurprisingly, she is also writing some related fiction: “In August I will be writing a number of short pieces in what I’d call a dementia voice. Then they’ll be passed on to a musician and a choreographer and a photographer for their response.” Sylvia Plath said everything in life is potentially good copy and Jan says, “We want to get it across that we don’t just do this work because we’re lovely people but because there’s something in it.” She talks about approaching the problem of dementia not via memory but via sufferers’ imagination. “In workshops with them, I’ve come across amazing work.”

Ms Carson wants her own amazing second novel to fly. It nearly vanished when she lost the manuscript on her computer in Edinburgh station. She says: “It would be great PR if I won the Costa prize as the baristas who found my pc worked in a Costa.” But she has the prestigious EU Prize for Literature 2019 to be going on with.

Ms Carson feels life is too short for Netflix. “I don’t have a television so go to the Queen’s Film Theatre a lot, maybe three times a week. If anything threatened the QFT, I’d chain myself to the railings. Most recently I saw Capernaum there, a film about refugees and acted by refugees which wasn’t an easy watch.” The Sunflower is Jan’s pub of choice in Belfast but she hangs out much of the time at cafes. “I don’t write at home, it’s too quiet. I write in cafes, and have a holy triangle near me, including Clements at Ballyhack and Connswater Starbucks where there’s a great table I go to for people watching.”

A self-confessed overachiever, Jan Carson believes in lifelong learning. “I’ve noticed there are two sorts of people, those who stop doing things at 60 and those who go on trying new things because they like learning.”

She is also, unsurprisingly, a voracious reader with a 200 a year book habit, Ms Carson has one surprising enthusiasm, though. “I’ve been reading Agatha Christie since I was eight and finished everything in the kids’ section. Now I am reading the novels in order, one a month. She wrote over a great span of history and you see attitudes change. The early ones are amazingly xenophobic and misogynist, the later ones less so. I love the bloody ones but my favourite Agatha Christie is probably The Murder of Roger Ackroyd. It’s intriguing and I always like an unreliable narrator.”

This article appeared in our June 2019 issue.