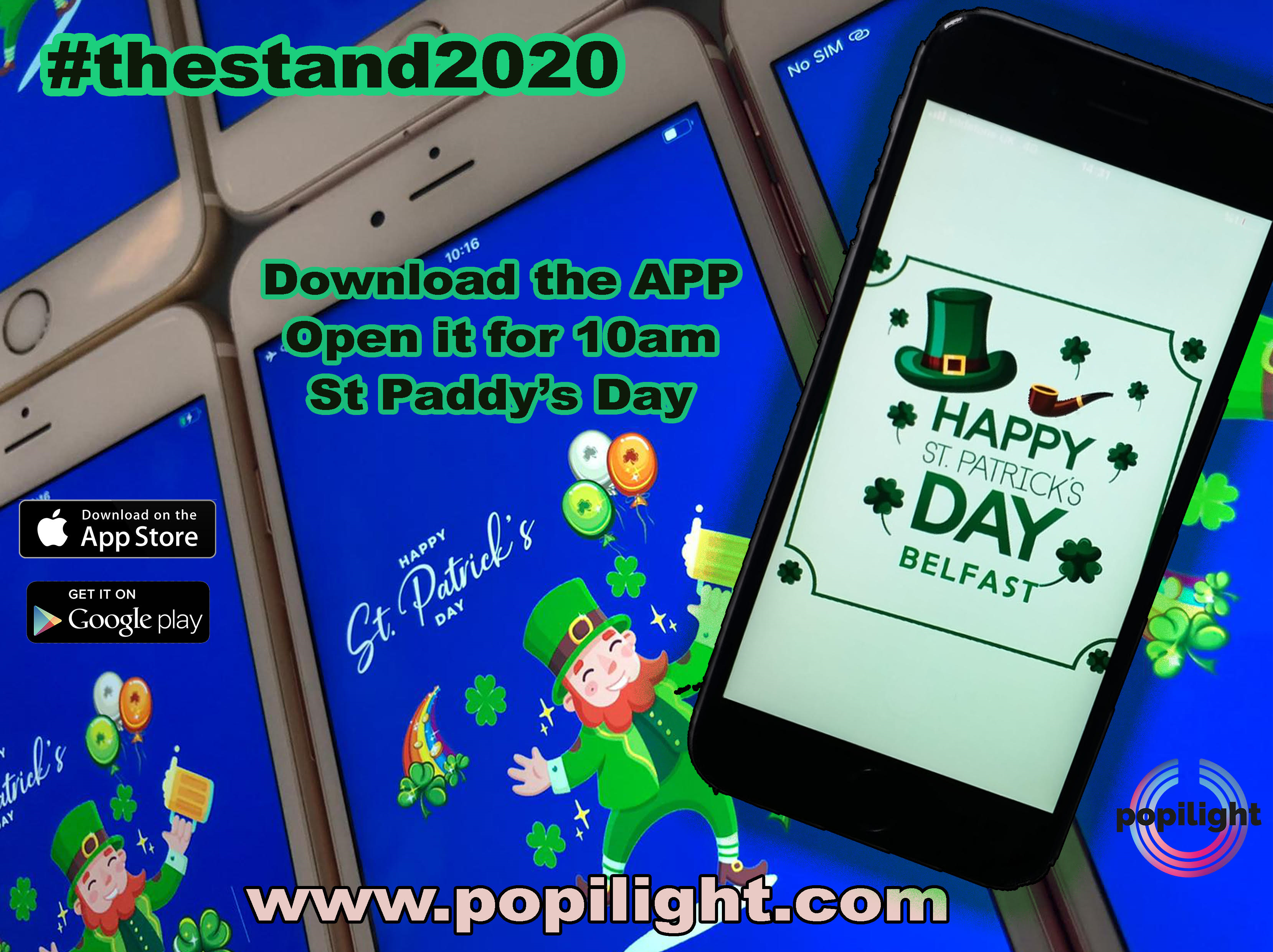 
Local Belfast tech venture Global Heartbeat has created the solution to staying safe on St Patrick’s Day without missing out on the craic!

Using the break-through technology of their Mass Synchronised Multimedia App called Popilight, the plan is to launch the #thestand2020 campaign and to give the Coronavirus its very first NO!  Popilight creates a new understanding of how to use mobile devices by being able to use the Speaker/Sound, Vibration, Screen/Image, Flashlight and Networking Protocol functions of a device. It can do this on thousands of devices and with almost no latency.  It works in both physical and digital social environments (at the same time) and without being geo-spatially dependent.  All of this can be managed and controlled from a single mobile device/phone.

Liam Lynch, spokesperson for Global Heartbeat explains; “Now this feels like quite a mouthful, so without getting all ‘tech’ we will give you the lowdown on just one example of Popilight in action.

It’s match night; I am at the local stadium to watch my favourite team play live and the Popilight App is already downloaded and open at my team’s very own pre-selected channel.  Suddenly a chant or song starts and all the phones synchronise together, my team’s logo appears, the sound and vibration kicks in and thousands of fans become both physically and digitally connected.  Sure, this sounds great and it’s pretty cool when I can take a proud selfie with my team’s filter and then do my social media thing for all to be jealous!  But (there’s always a but), great feels just…ok, I demand awesome!”  Liam continues;

“So it’s time to mention a very important feature of the Popilight App. From anywhere in the world, whether you’re at the supporter club, you’re the carryout crew watching from home or even the hard-core watching on the move, you will digitally be with the fans in the stadium.  As long as you have an Internet connection, anyone anywhere can cheer, sing, scream and cry together simultaneously as one united voice at exactly the same time!  This is truly insane and when the social media starts to flow and people of all nations share their love of my team, the world begins to feel that little bit smaller and just a touch more beautiful.

Now it’s time to take a look at the Paddy’s Day conundrum where all parades have been cancelled, large gatherings forbidden and the authorities now looking at extreme measures of social distancing.  We say that’s fine, if small groups are on the menu, then small groups it must be.

From 10am St Patrick’s Day on the hour every hour, those who have downloaded the Popilight App will experience the same incredible unity as those who were supporting my beloved football team.  You will love the colours of the custom Paddy’s Day channel, you will definitely know all the songs and chants, plus there are some very special redeemable and incentivised announcements.  Take a selfie and upload it to Popilight’s special #thestand2020 campaign and celebrate the craic of Paddy’s Day with folks from both Belfast and potentially anywhere in the world with Internet.

On a more serious note, Popilight aims to preserve the basic human fundamental of personal interaction, because as we are all learning quickly, segregation is an unfortunate by-product of Covid 19.  Global Heartbeat states “as human beings we cannot be dictated to in this manner and we must make our stand and make it now.  While scientists race to find a solution, as a socially driven and tech savvy company it is our duty to use the tools of the modern generation and encourage people to get involved”.

There’s a very passionate team of collaborators putting this together and their vibe is very pro Belfast.  They say “as a city we know what we’re about, we’ve been up against it before and we’ve learned to bring our game when the going gets tough.

Internationally more people are acknowledging Belfast is back, so we definitely have the tenacity to lead this stand with the first socially driven initiative of its type.  We will be the ones to share the first good news story of this wee corona  ‘situation’ and we will be the first as a community to say NO, you can’t stop our craic!”

A spokesperson for Global Heartbeat also stated they would like to continue the #thestand2020 campaign and replicate the Paddy’s Day initiative.  The call is out to government agencies, corporations and individuals to get in touch and get involved.

Continuing the fight will be a financial challenge and that has prompted the group to launch a Go Fund Me Page.  You can access it with gofundme.com/f/thestand2020.  Funds raised will be used to increase the capacity for Popilight’s connectivity and further increase the impact of the initiative.

Download the Popilight App at the app store and visit us at www.popilight.com