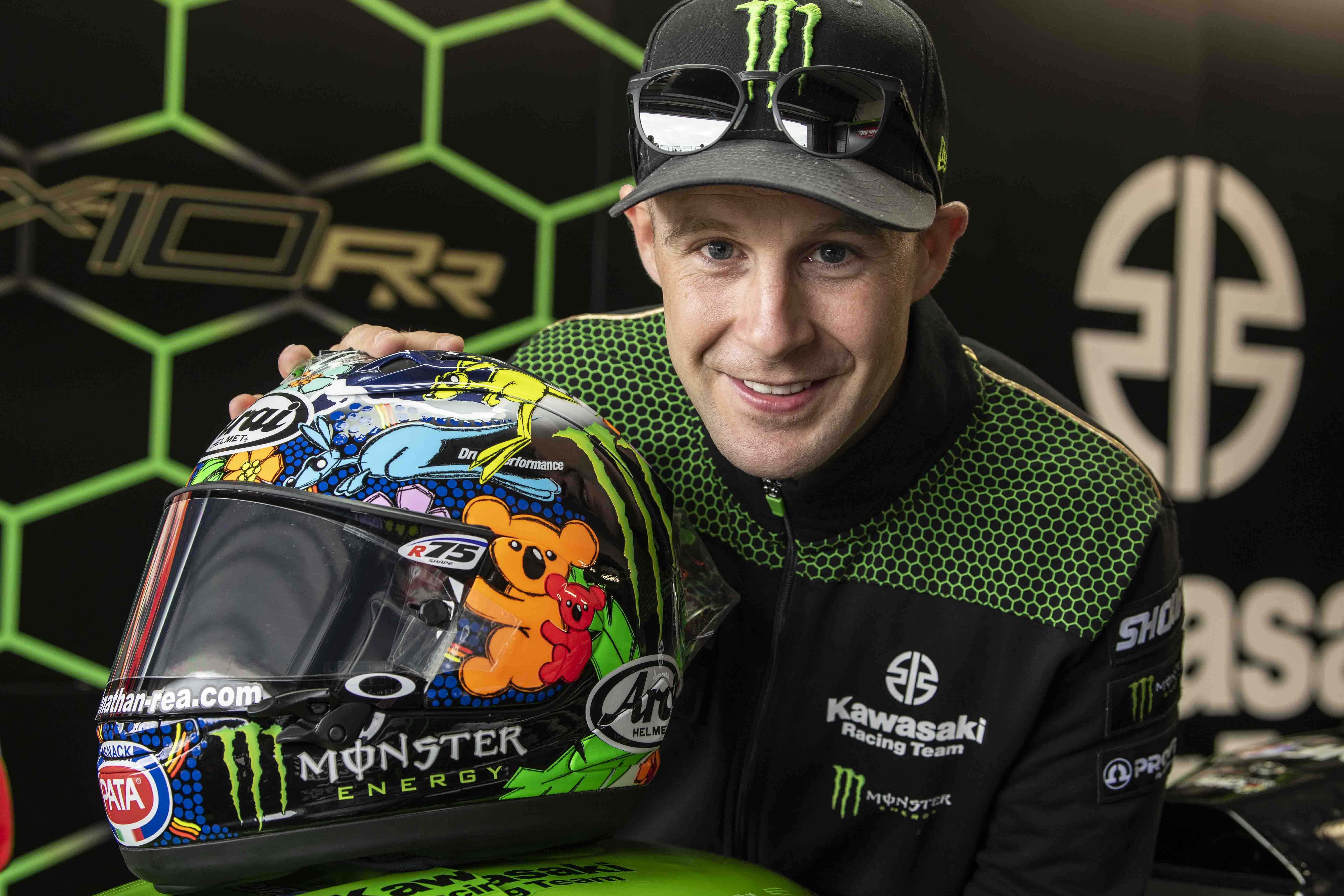 
Jonathan Rea will be wearing a specially designed Arai helmet this weekend, for round one of the Superbike World Championship at Phillip Island in Australia.  This unique Arai RX-7 helmet, designed by legendary Italian designer Aldo Drudi, will then be auctioned to raise funds for the Blaze Aid organization which helps communities in Australia recover from natural disasters such as the bush fires of late.

In recent weeks the devastating bush fires that tore across eastern Australia were headline news around the world.  For Jonathan Rea and his family it was an immediate and worrying time.  Jonathan’s wife Tatia is from Phillip Island and her family have a home near Bright in north-eastern Victoria. They could only watch and wait for news at home in Northern Ireland as the fires raged around the small countryside town on the other side of the world.

Fortunately, the property was safe, but many people and communities across Australia were not so fortunate.  It is estimated that the fires have destroyed almost 20 million hectares of land (200,000 square kilometres), 5900 buildings, of which 2800 were homes, and has killed at least 34 people and over 1 billion animals, some of which were endangered and may have been driven to extinction.  The cost of the devastation is expected to exceed $4.5 billion AUD.

One organization that raises funds and helps with the financial cost of such events is Blaze Aid (www.blazeaid.co.au).  It is a voluntary organization that works with families and individuals in rural Australia after natural disasters such as fires and floods. Working alongside the rural families, their volunteers help to rebuild fences and other buildings that have been damaged or destroyed.  However there work extends beyond that and one of their mottos is “Not just rebuilding fences, but helping rebuild lives”

With such a personal attachment to Australia, and this current situation, Jonathan and Tatia decided they had to do something to help Blaze Aid raise funds for their current appeal.  Jonathan contacted his helmet sponsor Arai and the renowned Italian designer Aldo Drudi to put together a one-off helmet design that he will wear for the Phillip Island races, after which it will be auctioned with the funds going directly to Blaze Aid.

The WorldSBK organisers have already initiated an auction for BlazeAid of other WorldSBK memorabilia, through CharityStars, and Jonathan’s helmet has been added to this.  To place a bid, please follow the link below.

Jonathan, Tatia and the entire Rea and Weston families would like to send heartfelt best wishes to everyone affected by the recent bush fires and hope that, with the help of BlazeAid, they can start to rebuild their communities and their lives.