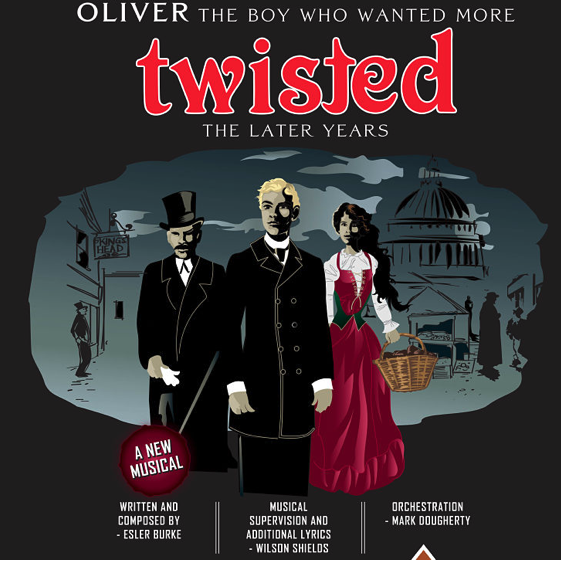 Online Screening of Twisted this Easter

Twisted premiered to rave reviews at the Theatre at the Mill on Wednesday 20 February 2019, and this exciting new musical by Esler Burke with orchestration by Mark Dougherty and Musical Supervision and additional lyrics by Wilson Shields takes up the story of Dicken’s Oliver Twist, however, it is now fifteen years on and Oliver Twist is now in his late twenties. The market place of his youth has changed little, and when he first meets and falls in love with Jane their happiness seems assured. However, all is not as it first seems; dark days lie ahead. Characters from Oliver and Jane’s past come back into their lives, but who can they trust? Who is out for revenge? Will Oliver’s love for Jane stand the test of time?

Writer and Composer, Esler Burke explains: ‘This has been my dream and at the age of 72 I didn’t believe I would ever get to see a professionally produced staging of my production. Lionel Bart was always a hero of mine. I have read his autobiography many times and slowly an idea formed In my head when I discovered Oliver had a half brother, Edward Leford, in Charles Dicken’s book. This fact was not used in the 1968 film with Oliver Reed and Ron Mooney, or by Lionel in his stage production. Edward Leford was a criminal who later changed his name to Monks. Fifteen years older than Oliver he tried to arrange the young Oliver’s murder in an attempt to secure the inheritance left to them by their father. Five years ago I set about writing the narrative for this idea of an older Oliver, 15 years on, being chased by his evil half brother. Over that time I wrote and rewrote my original story many times telling the story of Oliver; his life, his love and his friendships. The songs and music came to me at the most inopportune moments, sometimes working through the night. Gradually with help and direction from script writers everything came together and the result is the performance you are about to see. I do hope you enjoy this production as we battle through these extraordinary times.’

Twisted is available to view from 7pm on Friday 10 April through to 12 midnight on Sunday 12 April 2020 by clicking on the following link: https://youtu.be/zNiGsUZ7dnc