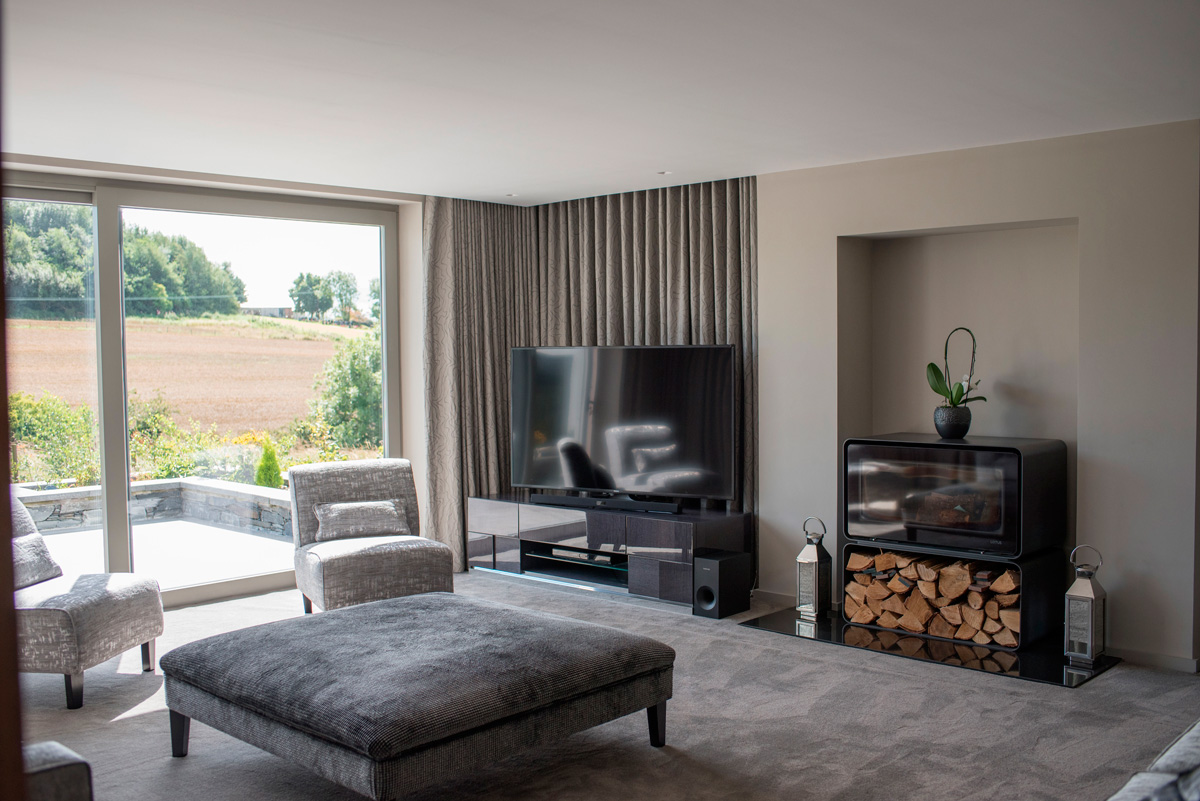 Danny and Nuala’s brief was for an innovative, modern, spacious home that would be flooded with natural light as well as being comfortable and practical. They specifically requested five good sized first floor bedrooms, each with a dedicated en-suite; and a covered exterior area so that they could extend their time outside during our ever changing weather.

Due to the sloping nature of the site, it was not without its challenges and the existing Planning Approval had been granted with restricted ridge height, traditional materials and a restrained / modest front elevation.

However, the site had a roadside frontage facing north and a rear private aspect facing south. This was ideal, as low energy design is always one of my main concerns. This allowed me to orientate glazing and the main habitable rooms such as the kitchen, living, lounge and bedrooms towards the sunny south side of the house and cluster other rooms such as en-suites, cinema, games and utility room towards the cooler north.

This configuration allowed me to play with the interior light quality and to maximize sunlight and heat within the areas of the house where it was most advantageous, which along with solid mass floors; under- floor heating; a mechanical air heat recovery system as well as extra insulation to the building envelope, the house was awarded an enviable B+ energy rating. Danny and Nuala recently informed me that, despite being more than twice the size of their pervious house, their annual outlay for running costs have actually been reduced.

It was important for me to work closely and listen carefully to the specific requirements and demanding brief from Danny and Nuala, whilst at the same time guiding and advising them through my own experience and expertise. This was a particularly rewarding experience for me as having previously worked on remodelling their other home I knew that they would wish to innovate and there would inevitably be some enthusiastic debate.   I designed a split-level house which followed the contours of the site allowing me to provide increased interior headroom, a series of stepped exterior terraces and I was able to experiment more freely on the private rear elevation. I used complementary high quality materials such as metal, wood and glass which I carried inside the building to articulate the interior design.

The existing Planning Approval height restriction suggested a conventional one and a half storey property of limited usable first floor area. To overcome this problem I developed a unique split gable design form, which characterizes the exterior appearance of the house, reduces the ridge height while allowing full head height throughout the first floor. To accommodate the first floor bedrooms it was also necessary to utilize the space above the garage for a guest bedroom and en-suite which I connected to the house with a slender glass bridge. To achieve the covered outside space I formed a sizable first floor balcony which extends between two wings of the house with access from bedrooms and the first floor landing allowing direct contact with exterior space above ground level which is a rare and valuable commodity in contemporary house design. Extra large sliding glazed doors from the main rooms, maximize views, give a great sense of space and light as well as permit a free flow between interior and exterior spaces. I believe that flow is critical to a fully integrated house design and to this end I included a second staircase which always allows an alternative route to move throughout the house and especially between floors. The hidden doorways, which I included between wings of the house and between the kitchen and utility room not only increase flow and make the house seem larger but also introduce an element of unexpected surprise.

The construction stage of any project is often the most fraught and demanding. However, with John Dynes & Sons appointed as main Contractors I was confident that the project was in very safe hands.  Gavin Dynes proved to be a positive and talented site manager.  The Clients and Contractor worked with a spirit of mutual respect and enthusiasm and everyone cooperated as a team throughout the project which I believe contributed greatly to the success of the finished home.