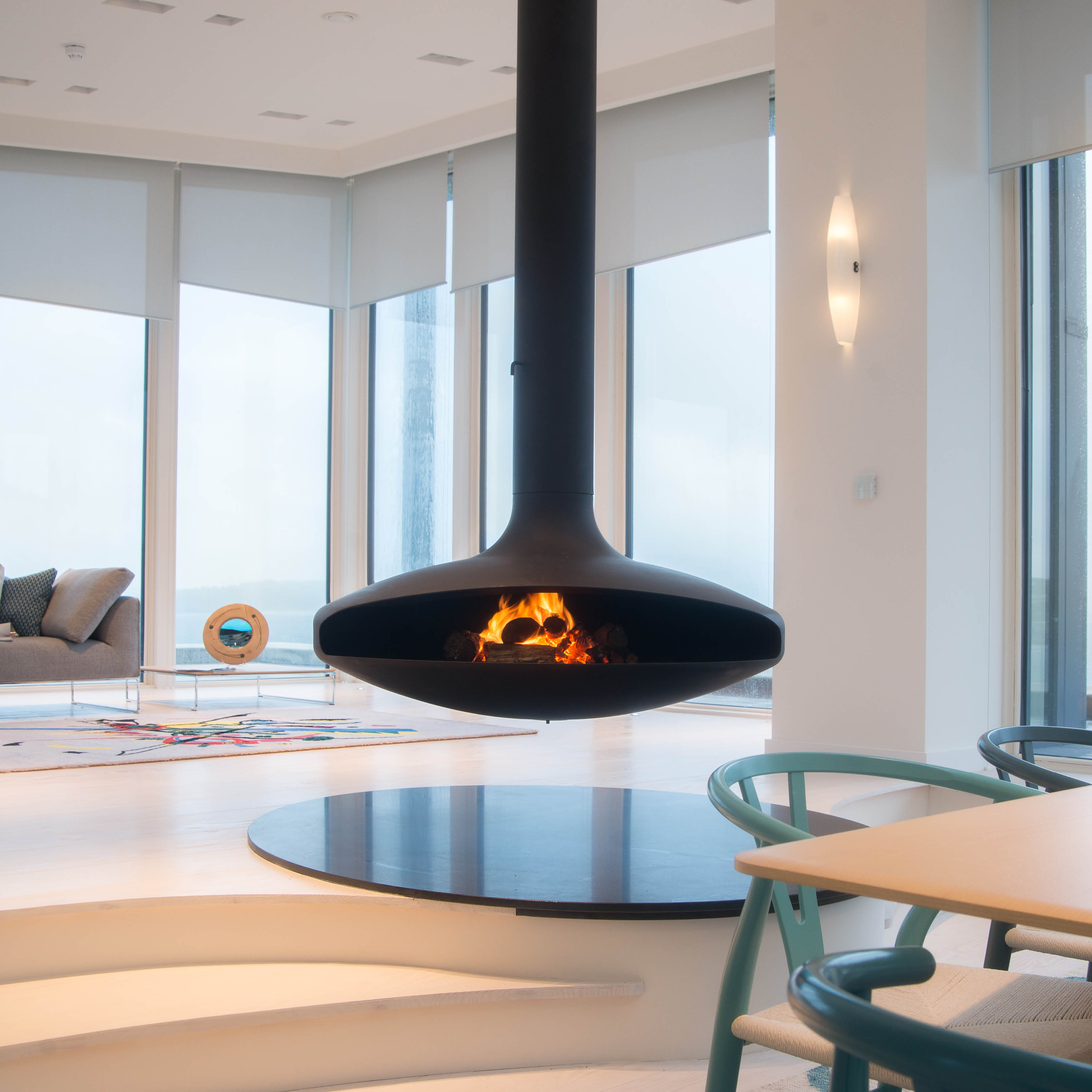 RAIN ON THE WIND 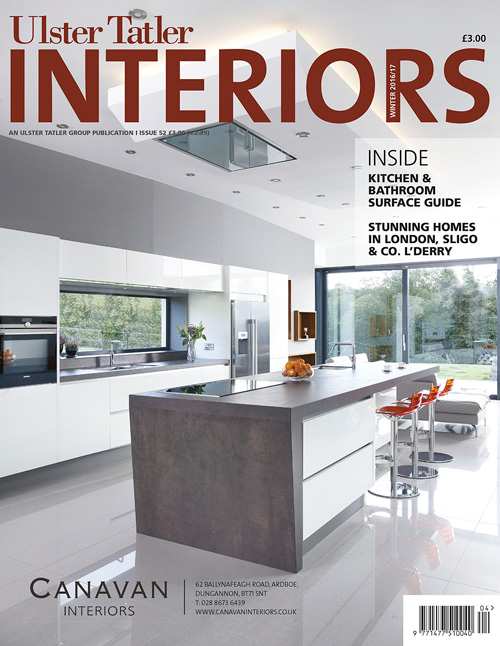 Walter Macken’s best selling novel ‘Rain on the Wind’ is about a romance set on the Irish Coast… and so is this project… albeit a romance with design acted out by client, architect and interior designer.

The client had a long term family connection with this part of North Donegal and acquired a water’s edge site which had somewhat more than a sea view with an extensive beach on the left, through a bay view with many inlets and hills in the background right through to the right hand foreground of a village harbour.  In other words the sort of view that would invite continual new discoveries interspersed with harbour activity and the occasional windsurfer.

Local architectural consultant Micheal McBride had not long returned from working on high specification projects in Australia and was certainly inspired by the challenge of designing a home with a difference for an active family right on a headland without making it uncomfortable in its immediate environment.  He achieved this with clever profiling into the sloping hillside – the young people’s AV room den, bedrooms and bathroom are the only lower basement level accommodation on the lowest part of the hillside.  The master bedroom, dressing and en-suite are in the other end within the higher part of the hillside sandwiching the much longer main body of the house in between comprising living, dining-kitchen, 2 x bedrooms and utility.  The potential for a block mass was alleviated then by roof pitches on the various elements which afforded both sloping double height spaces and natural light opportunities in a very dynamic manner.  As appointed interior designer I was on it from the early stages.  I quickly realised the client was very serious in their quest for a blend of perfection in the function, modernity and ultimately a level of sophistication which could be achieved with the daring and simplistic principles in the interior design that had driven the architectural design.  Really what we are talking about is lifestyle – but a lifestyle that doesn’t want layers of pretentious stuffy bed cushions upon the ubiquitous upholstered buttoned high headboard nor period panelled doors hankering after an age gone by which we know is not actually real today.

Cynical onlookers with closed minds might well see the product of such clean-lined interiors as “not much in them” whereas paradoxically they are actually much less forgiving in creating them since imbalanced proportions, poor colour choices or detailing would be vividly exposed.  Clients who are prepared to pursue this journey of simplicity right through to the end with all the ups and downs of an ongoing consultative process and quite frankly who have the finance to do so are in the hen’s teeth bracket.  Designers like myself weaned on this ethos from my early career have accepted long ago we are working to a niche market – but creatively anyhow a very rewarding market.  Enough of the motivational stuff – what about the scheme itself ?

This in my view begins with room use and space plan ratified by a first fix lighting design with nominated circuits for dimming.  In this case the main lighting in the living, kitchen and dining was via integrated frameless adjustable LED downlights – in friendly warm white of course punctuated with critically positioned recessed downlights at window furnishing and bedroom wardrobes.  As an importer for such lighting ranges as Flos, Artemide and Foscarini I had no excuses in getting the right fitting for the  locations such as the pendant over the open spiral which emulates the stair shape or the slim dining pendants which don’t block the panoramic view.

For experienced guidance and a cutting-edge product offer for sanitary ware I find myself returning to long-time players Beggs & Partners and main contractors for the house Noel and Stanley Tease took heed of the first fix requirements for this enabling hassle-free installation of concealed cisterns, wall and floor taps.

There are hidden gems of talent in Ireland in the form of tradesmen such as Denis Diver, a native of Tory Island, he formed the beautiful white concrete open spiral staircase which has walnut inserted treads.  This is a ‘piece de resistance’ in the house and also creates a great sense of arrival to the master suite.  I am fond of mosaics as daringly permanent colour splashes and David Scott Tiles duly responded along with Jura marble tiles to the entrance halls, utility and shower room.  I find this early commitment to colour gives a lead to the adjoining bedroom or hallway treatments.

A Schiffini Cinqueteare kitchen by design Guru Vico Magistretti supplied by Designspace London with titanium coloured corrugated doors and Carrara Marble topped island had the necessary aggression in its design to provide an unapologetic yet highly functional kitchen resolution.  It is in many ways at the core of the house after the utility, hall, bedrooms and open spiral  but before that resplendent view from dining and living.  The client was the main influence in the bleached white wide-board flooring which extends throughout all areas after the back hall, providing that truly ‘beach house’ unifying element.  Interlübke wardrobes and master bed in crystal white quietly allowed simple plain bedlinen to provide a calming influence after work and play.  Of course the basement with its Cor sofas in the AV room can belt out action movies utilising the Bowers and Wilkins in-ceiling speakers to the relatively undisturbed living above where the award winning Gyrofocus ceiling -suspended fireplace can rotate (using a heat-proof glove!) from dining to living.

A Control 4 home automation system seamlessly interacts and coordinates the technology throughout the property. With one touch the client can dim the lights, stream high-resolution music, turn up the heat, arm the security system and even use the facility to check in on the property from elsewhere.  Home automation 20 years ago was probably only for premiership footballers who wanted to show-off to their mates since they were the only ones who could afford it -but times and technology have changed.  This area can be a mine-field but Belfast based Blackquarter AV  provided a user-friendly path through this hi-tech area.  Such big drops for electric roller blinds (yes curtains weren’t going to cut it in the living/dining/kitchen) could in my view only be risked to the daddy of them  all – Silent Gliss who are dominant in this market for good reason.  With the installer Fergal Speers I was actually able to get progressively stepped stop-points on the drops commensurate with the various ceiling pitches with these blinds where even the fixing screws are concealed on the brackets all helping the smooth uncluttered look.

The living area’s Cor Mell ‘L’ shaped seating unit is very invitational and sits up a level from the dining area where the iconic Wishbone chairs reassure the eye we are not afraid of colour.  Throughout the house metal fabricator Mark Moore was tested in a variety of ways from the complex angular structural steels to the organic form of the handrails and balustrades. As we stand now at the end of summer landscape designer Angela Jupe has not yet had a chance to work all her magic but soon this frame will be on the picture.

Interior Design for the here and now of a flavour that won’t date is nothing new and has its roots in the modern movement protagonists of Bauhaus through to Eileen Gray and more current examples such as the work of Philippe Starck (when he is in the mood) but maybe the principles behind it have been around for a lot longer, after all …… it was Leonardo Da Vinci who uttered the words “simplicity is the ultimate sophistication”.